Food for Thought – The Cycle of Democracy 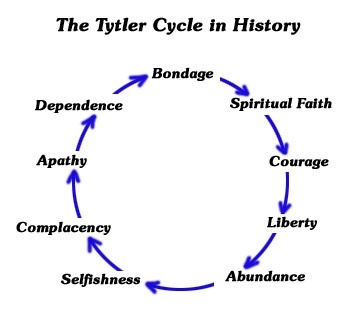 ‘The Tytler Cycle’ or ‘The Cycle of Democracy’ is commonly attributed to Alexander Fraser Tytler (1747 –1813). This cycle is also know as ‘The Fatal Cycle’.

Where are we in this cycle and why are we there? 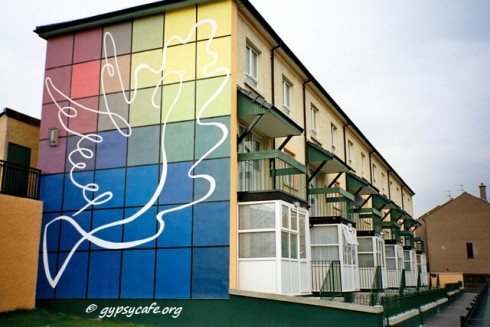 When faced with difficult choices, especially amongst bad options, conscience can always show the way. Needless to say, what the planet needs right now, more than ever, is a return to conscience. Conscience lends itself to a variety of peaceful solutions.

Not all situations call for distinctions to be made, but when they do, a healthy conscience would normally step in automatically. Of course, conscience interacts with ethics, etiquette, morality, religion and other frameworks for rules of conduct, but personal conscience can and does act autonomously, and will override externally imposed morality, where necessary. As long as conscience is maintained, conscience is the only inner guiding system which has almost full  independence and autonomy. It is independent from the ego-self and the group-self and it is autonomous in prompting one to correct one’s course.

Conscience will override questionable morals and will adjust approaches and actions accordingly. Conscience is an autonomous guidance system within, whereas morals depend on customs and norms without. The more relative morals become in a society as a whole, the more consciousness dims collectively and the more unconscious society becomes as a group. It is during such times that inner conscience is especially needed to guide individuals.

Only a very small percentage of individuals are born without any conscience at all – and they are considered to be “disabled” (psychologically), meaning that they don’t have the full range of emotions and feelings that would usually be accessible to the average person. They are also unlikely to ever develop (a) conscience. Other than these exceptions, conscience holds much more universality than ethics or morals do, and therefore we would be much better off aspiring to universal conscience than universal morals or ethics. A healthy conscience leads to expanded consciousness on an individual level, which is expressed on a universal level.

The small percentage of conscience-less (without conscience) individuals we find in society are naturally the proverbial  “foxes” as described in the Chicken Little fable (See Parts 5 & 7) and we find them in all walks of life. However, there is a significant percentage of average individuals who eventually revert to similar behaviors after having lost (or given up) their consciences as they went along. Very often a conscious decision was made to do so, in order to gain certain advantages. The nature of conscience itself does not allow for it to be given up unconsciously, so the suppression of conscience is certainly a conscious process initially and subsequently the decision is swiftly put out of mind and henceforth avoided at all costs.

If the majority of individuals in a society learn to suppress their conscience – to the extent that a general moral relativity sets in – and once the virtues of conscience are lost by adults in general, they are unlikely to be instilled, cultivated or strengthened within children either. When a society has more “foxes” than “chickens”, parasitism, prejudice, projection, exploitation, bigotry, double standards, hypocrisy, abuse of power, corruption and the active destruction of old value systems ensue and a general regression leading to potential repression sets in. A strong accompanying feature of such a scenario is often decadence.

It has been determined that historically mass decadence (and sometimes war) has almost always preceded the collapse of civilizations. In other words, the idea of the destruction of values on the basis of them being “old fashioned” or “conservative” in order to facilitate decadence (boundary-less living) often have unintended consequences, because all systems need structure in order to function, externally and (importantly) internally – structure being what value systems are meant to provide in societies and civilizations. No limits, no restrictions, no boundaries, means no structure, which results in a vacuum. In a big enough vacuum, collapse is inevitable.

Therefore, going forward, decisions and choices based on conscience may be the only available tool to rescue (individuals in) a declining civilization from internal (and external) collapse. Conscience can save individuals, and in the present-day context, the world.